Light as a feather, stiff as a board. We used to play a silly game in my childhood that used this phrase. But projected into the current state of leading edge planar magnetic headphones, its almost a metaphor for how Dan Clark from MrSpeakers is looking to carve out a unique direction for his products.

Its true, most top tier planars are very heavy, usually over 400g without the cable attached. Dan’s newest creation slides in at a mere 290g, and at this year’s Rocky Mountain Audiofest he was truly sailing for new shores in the category. The original Ether lands a nice middle ground between the market, appearing on the lower end of cost, but some would argue just as capable as other (more expensive) flagships. The new Ether 2 hopes to keep that momentum going, priced at an even $2k for the standard release.

“We started ETHER 2 with the goal of creating an all-new design that took advantage of everything we’ve learned about drivers, comfort, and mechanical assemblies over the last six years,” says Dan Clark, Founder and Headmaster of MrSpeakers. “As always, our first priority was to realize major sonic improvements. Second, we wanted to drive weight down below 300 grams without compromising build quality, sound quality, or comfort. I feel ETHER 2 knocked it out of the park on all counts; it’s a fantastic sounding headphone with an incredibly warm and natural tone, incredible resolution, huge soundstage, and when you put it on your head it’s barely there.”

“In the past, our TrueFlowTM technology was built into an existing motor structure,” Clark explains. “With ETHER 2, we designed the motor around the TrueFlow technology, realizing major improvements in internal motor air flow. The result is a significant upgrade to all aspects of sonic performance, from bass that reaches firmly into the subsonic, through the liquid-smooth midrange, and across the relaxed yet incredibly detailed highs. All this is wrapped in a greatly expanded soundstage that delivers an immersive and natural listening experience.”

At the show the headphone was indeed light both to hold and to head. The new baffle is made up carbon fiber and the Nitinol headband includes no moving parts, so there is less to wear down and break over time. Some aesthetics of the new can are similar to his electrostatic efforts, including an updated grill. Expect shipping to ramp up this month, there is also a special edition available that includes and extra cable and signed stand/display case for $2.5k.

The sound was clear and balanced from what I could make out on the loud showroom floor, Muse’s stop-and-go track Madness was accurate, low-reaching and responsive to the song’s quick sonic circus of instruments and samples. Expect more impressions to come once we can get some more alone time.  Dan has a tendency to gravitate towards spectacular sound, something that not all audio engineers fully make their way to. Expectations are high for the second round, can’t wait to see how the Ether 2 fares. 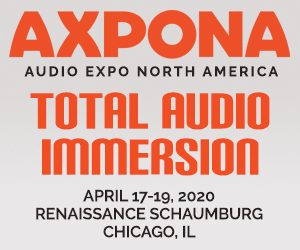